Today I decided I would outsmart the cattle, and climbed up sooner through the trees. This path is quite steep and slippery and definitely not runnable – well not for me anyway!

The morning was beautiful and warm as I made my way along a rocky section of the path at the top. As I rounded a corner I came face to face with a female Mountain Reedbuck. I instinctively froze and to my delight so did she. She couldn’t have been more than six meters away. She continued to stare at me – as if caught in a cars headlights, flattening her ears to the side of her head and crouching a little so as to be less conspicuous.

I kept dead still not daring to breathe. After a while however, I started talking softly to her in a voice that I hoped was reassuring. I told her how happy I was to have met her and of course how beautiful I thought she was. After a minute or so of this unabashed flattery she surprised me by relaxing ever so slightly.

I took this moment to say my farewell, wishing her a good day further and telling her that I hoped to meet her soon again on the trail. I turned slowly and walked carefully off to the side so as not to startle her, picking up the path a little further on.

My only other encounters with Mountain Reedbuck have been of me admiring them from a distance as they bound away with their ‘bambi- like’ tails held up like flags. To have had the privilege of getting so close and ‘interacting’ with one (if you can call it interacting), is so unbelievably special. I will carry that image with me forever. A precious picture memory. 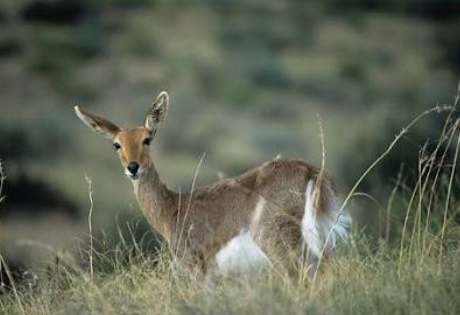 Unfortunately not my very own special Mountain Reedbuck – but she was very similar.

2 thoughts on “A surreal encounter”